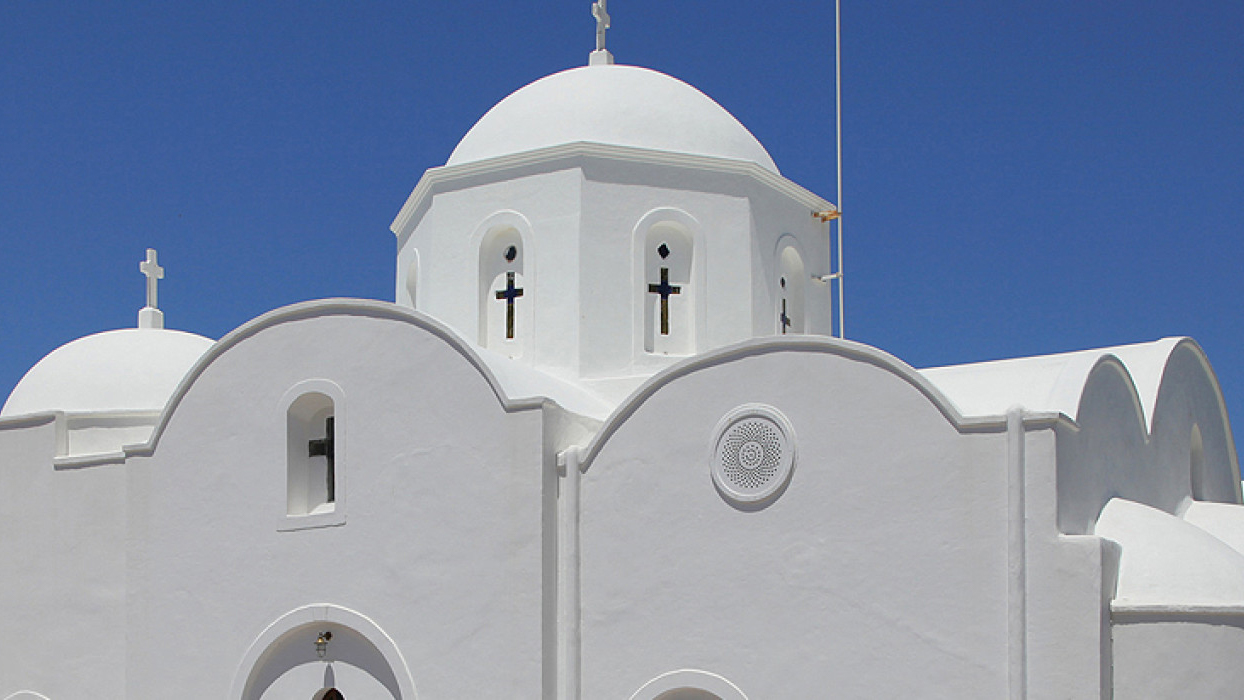 Holy Cave of the Apocalypse

Located on the hill between Skala and Chora, the Holy Cave of the Apocalypse is a point of reference not only of Patmos, but of Christianity worldwide. This cave was the shelter of the beloved disciple of Jesus, John, in 95 AD, when the Emperor Domitianos exiled him to Patmos, punishing him for declaring the Word of God in Ephesus. As John testifies , he didn’t reach Patmos as an exiled loser or as a political prisoner in difficult times, but as an exile “on a spiritual mission”, continuing to disseminate the Word and the Essence of God.

As the Evangelist himself testifies at the beginning of his book, “I John, who also am your brother, and companion in tribulation, and in the kingdom and patience of Jesus Christ, was in the isle that is called Patmos, for the word of God, and for the testimony of Jesus Christ. I was in the Spirit on the Lord’s day, and heard behind me a great voice, as of a trumpet, saying[…]”(Bible, King James Version (KJV))

In his exile and in this spiritual mission he is accompanied by his faithful disciple Prochoros. According to Christian tradition, during John’s stay in the cave, the rock was torn, and through three smaller slots, symbolizing the Holy Trinity, the voice of God was heard, dictating John the Holy Book of Revelation. It is plausible that in this very same cave the fourth Gospel of John was also writen.

From the 17th century the temple of St. Anna was incorporated next to the holy cave, which was built by Osios Christodoulos as a tribute to: the mother of Virgin Mary, the mother of Osios himself, whose name was Anna, and the mother of the emperor Alexios Komninos. At the right of the church is the Holy Cave of the Apocalypse, within which lies the holy temple of St. John the Theologian. The cave is part of a complex of churches and other buildings (warehouses, cells, chapels) named “Revelation”.

Today, the Holy Cave of the Apocalypse has been transformed into a place of worship, where the pilgrims can see the location where the Apocalypse was written, touch the triple fissure in the rock, enter the point at which the Evangelist rested, as well as touch the indentations in the rock that helped him to get up. Furthermore, there, one will also find the lectern of Prochoros.

The cave of the Apocalypse is a place of devoutness, where the pilgrims can be initiated in the beauty and awe through silence, feel, prayer and insight. They can also sense the feeling generated by the image of this magnificent Sanctuary Cave.

In 1999, the cave was declared a “World Heritage Monument” by UNESCO along with the Monastery of Saint John the Theologian.

Monastery of St. John the Theologian

In 1088 in Patmos, St. Christodoulos the Latrinos , a gifted and educated monk from Bithynia, was granted funds by Imperial Decree (Chrysovoula /Golden Seal) by the Byzantine Emperor Alexios I Komnenos, to establish a monastery in honor of St. John the Theologian. Thus, the fate and future course of the island was set.

Built on top of Chora, the monastery dominates the whole island and reminds Byzantine castle. Archaeological findings indicate that it was built on the site of an ancient temple of Godness Artemis and of an early Christian basilica. It is surrounded by an irregular rectangular defensive enclosure dating from the late 11th century until the 17th. Its Catholic, bank and cells have been preserved since the Byzantine period.

In the 11th century the Catholic was rebuilt and in the 12th century the chapels of the Virgin Mary and St. Christodoulos were added. In the chapel of Virgin Mary, on the south side of the Catholic, the paintings are dated back to the last decades of the 12th century, while at the same time the bank of the monastery, which is located on the northeast corner of the ledger, was painted.

The cells are lined up on the south side of the fortification. In the monastery there are also chapels of the post-Byzantine time: those of St. Vasilios, St. Nicholaos, Timios Stavros, the Baptist, of Sts Apostles (1603). Two smaller chapels are located outside the precincts of the monastery: St. George and St. Onoufrios (1611).

The Monastery Library and the rich collection of relics is considered really famous, the most important examples of which can be admired in the sacristy , which contains works of unparalleled worth, liturgical objects and precious utensils with artistic and educational value and importance as well as antiquities of the classic and the early Christian period.

For the digital representation of the monastery you can visit the site:
https://www.google.com/culturalinstitute/u/0/collection/patmos-monastery?projectId=art-project

The Chapel of Saint John the Theologian is located in Skala, close to the port’s waterfront; next to it there are the preserved ruins of building, which during the Early Christian period was used as a «baptistry». According to tradition, this is where Saint John the Theologian baptized the Patmians, while another tradition mentions that this is where the Saint stood when he banished the magician Kynops (or Kenepsi) to the bottom of the sea. The Chapel of Saint John is joined to a smaller chapel dedicated to Saint Polycarpos.

The Monastery of the Annunciation, the largest nunnery on the island ,is located in the southwestern part of the island and it has an outstanding view of the bay of Kipi, as it has been built on the cliff’s edge.

In 1613 the Abbot of the Monastery of St. John built a hermitage there, dedicating it to Saint Luke the Evangelist who healed him from a deadly disease. In 1937, the Elder Amphilochios Makris turned the hermitage into a monastery by adding new buildings and dedicated it to the Annunciation of the Virgin Mother .

The icons and the murals of the monastery are dated between the 15th and the 17th century. Nun Olympia, student of the famous hagiographer Fotis Kontoglou, played an important role, as she has painted a considerable number of icons of the monastery and she passed her art to her own students.

The monastery had also an important role to play during the Italian occupation, as the nuns, in their effort to maintain the Greek language, started teaching young children.

Today the monastery is inhabited by nuns. Their main activity is the embroidery with the notorious Patmian stitch, which is said to have been maintained from the Byzantine era. Some other activities are gardening and beekeeping. The monastery is also known for its charitable activity.

The church is decorated with murals from the 16th to the 18th century, while its winged altarpieces have wood carvings dating back to the 16th century.

The icon of Panagia Eleousa in the church of the monastery is considered miraculous and the first recorded miracle is dated in 1956. A small museum with sacred vessels opened in 2007 in the monastery. The monastery celebrates every first Friday after Easter.

It is a monastery for nuns, founded during the 16th century and situated in Chora (Patmos Town).

Before deciding to visit it, you need to contact the nunnery, as it does not have fixed visiting hours.

The following churches belong to the Municipality of Patmos and are registered under its cadastral lot: