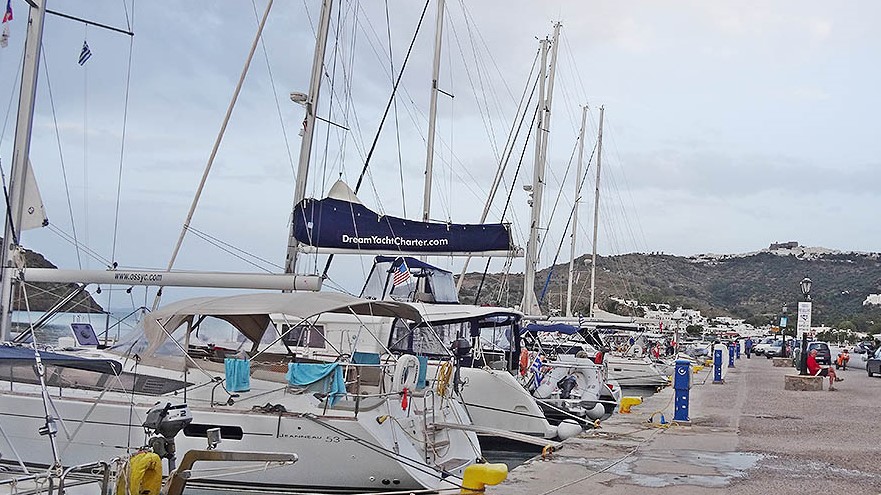 How to reach Patmos

Patmos is connected by ferry both with the port of Piraeus and with the islands of the Dodecanese, the Cyclades and the Northern Aegean, as well as with Northern Greece.

Patmos is connected with the port of Piraeus and the voyage lasts approximately 8 hours, while maritime connections also exist with the islands of Syros, Paros, Naxos, Samos, Ikaria, Chios, Lesvos and Limnos, but also with Leros, Kalymnos, Kos, Rhodes and Leipsoi (or Lipsi).

By catamaran or hydrofoil:

During the summer months, high-speed vessels connect Patmos to the islands of Samos, Fournoi (or Fourni) and Ikaria, as well as to those of Arki, Agathonissi, Leipsoi (Lispsi), Leros, Kalymnos, Kos and Rhodes.

Although Patmos does not possess an airport, during the summer months it is connected by boat on an almost daily basis with Samos, which is the closest international airport. Additionally, it is connected on an almost daily basis with Kos, which also possesses an international airport, as well as with the islands of Paros, Naxos, Leros, Kalymnos and Rhodes, all of which have airports.

By your own yacht or sailing boat-Marina

Patmos is very close to the coast of Asia Minor, at a distance of 163 NM from Piraeus. Skala is the central port, with its northern part to be available for small boats, sailing boats and larger yachts.

In the marina, you can refuel and make use of basic amenities, such as water and electricity.

Additionally, according to the weather conditions, you can also drop anchor in many of the island’s bays (Agriolivádi, Gríkos, Melóï, Kámbos), some of which also possess small jetties, as well as small moorings (buoys).

Patmos is among others a popular destination for the Aegean cruise with many arrivals of cruise ships each year.

Cruise companies list Patmos among the ports that they approach because it does not only have a high religious interest worldwide, but it is also a destination with modern infrastructure and authentic island beauty.

The travelers of the cruise will certainly visit the Monastery of St. John the Theologian and the Cave of the Apocalypse and will have the chance to get a small taste of the uniqueness of the island.

Cruises bring a consistently large number of visitors to Patmos especially during the tourist season, starting from March to November each year, giving a big boost to the local economy and society.