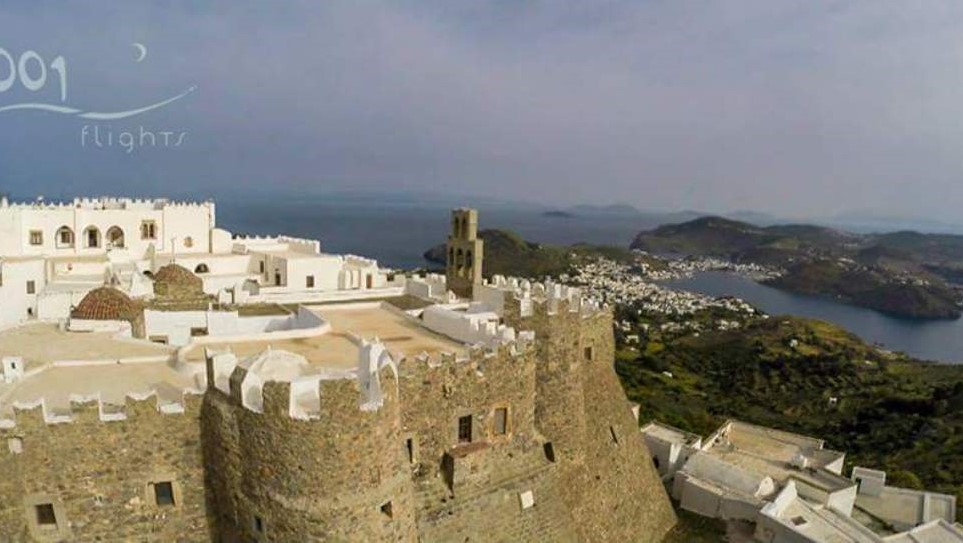 Patmos, one of the smallest inhabited islands of the Aegean, is situated to the south of Samos, the southeast of Ikaria and the northwest of Leros and lies at a distance of 25 miles form the Turkish shores. It has a maximum N-S length of 16km (10 miles) and a maximum E-W breadth of 9.6km (6 miles), and a shoreline measuring 62.4km (38.77 miles). It is composed of three landmasses joined together by two isthmuses, the highest point being the hill of Profitis Ilias (Prophet Elijah) (269m or 883ft above sea level).

A volcanic island, its outline presents an impressive succession of beaches, gulfs, bays, coves, capes and rocks with curious shapes, while the hinterland is characterized by sharp altitudinal upsurges at its two extremes, rocky hills, lower levels, valleys and small plains, often at the gulfs’ end.

From the picturesque yet tourist visitor’s arrival resort, Skala, which is the harbor of Patmos and the biggest settlement of the island, to the town, Campos, Grikos and other corners of the island, the visitor can enjoy in each of his turnings the blue view of the Aegean and reveal all the unique images of natural beauty Patmos promises to offer.

Chora is the capital of the island with 541 residents and World Heritage Monument by UNESCO since 1999, it is located in the south central part of Patmos, 4 km. away from the port of Skala, and it is the second largest settlement on the island.

Surrounded by the walls of the fortified Byzantine Monastery of Saint John the Theologian, Chora has kept to this day the architectural characteristics of the medieval village from which it derived: narrow, winding streets with a maximum width of 1.5 m., grand mansions and humble houses adjacent to each other, tall yard walls and flat roofs that create an overground road. Simple lines and dazzling white that hide well-made interiors and colorful, blooming courtyards.

Chora, a benchmark of the cultural route of Patmos and of its status, consists of communities that depict its historical development and its spread having the Monastery as the focus point:

Among them, the urban tissue maintained its consistency with humble houses, densely structured, reflecting the logic of fortification against the external enemy and creating districts, the boundaries of which are known only by locals: Elemonitria, Kylimountra, Laura, Lorna, Mangouri, Niochori , Pezoula.

The result is the entire Chora to be a landmark, with little precious points worth discovering, like the two squares, St. Lesvias (St. Levi) and the Town Hall Square (Loza), with the house of co-founder of the Society of Friends (Filiki Etaireia), Emmanuel Xanthos, the churches (51 in total, including Great Virgin Mary of 1783, the walled Ipapanti of 1600, Panagia Diasozousa of 1559, Saint Dimitrios of the 15th century, Holy Apostles of 1603, Saint Nicholas Alonaris of 1816) and the manors (Alexaki, Valvi, Gazi, Doriza, Calliga, Malandraki, Nikolaidi, Simantiri, Pagkosta, Paleologou, Sofoliou, Syfantou, Fountou), even if today many of them belong to new owners.

In Chora, apart from touring the streets and enjoying the magnificent view, there are fine shops with a variety of souvenirs, restaurants, picturesque taverns, atmospheric famous bars, as well as a hotel and rooms to let.

Aporthianos Road: the historic path
Aporthianos road is the oldest stone path with a length of 2.4 km that connects Chora with Skala (a walk of about 40 minutes from Chora to Skala and 50 minutes in the opposite direction) and the first public road on the island. It was constructed in 1819 by the Metropolitan Nektarios Sardis, and it was restored in 2010within the framework of “Paths of Culture” of the Greek Society for the Environment and Cultural Heritage (ELLET), enabling the visitor to wander in it.

The only port of the island, Skala, is the picturesque tourist center of the island: the point of arrival, but also the point of several excursions to all the beaches and sights of Patmos as well as of trips to the islets Arki and Marathi. It is also the largest and most populated settlement with 1,415 residents, and a place with all public services of Patmos, except for the Town Hall, which is located in Chora, shops, banks, and a wide variety of cafes, snack bars, restaurants, taverns, hotels and rooms to let. It is in Skala where the heart of the nightlife of the island beats: bars and clubs with live music are open until dawn, proving that Skala combines everything, moreover because of the fact that in the northern part of the harbor, there is a marina for docking yachts and sailing boats.

Skala was in the 16th century, one of the most important ports in the Mediterranean, offering safe anchorage in Patmian ships (mostly monastic) and foreign ships, but because of the fear of pirate raids, the buildings of that time were almost exclusively warehouses and workshops. From the late 18th century, however, and the installation of various families, Skala is converted to commercial and maritime center, contributing to the economic prosperity of the island and thus to the literature and the arts. Today, the port of Skala, built in 1972 during the dictatorship, continues to be an economic pole in the development of the island, a fairway to the world, and also the point from where all roads to the mainland and to all directions start. Because of its position as a seaport, and the existence of land to build due to its relative “youth”, besides the eucalyptus, Skala has a strong influence by the architecture of the Italian occupation of the Dodecanese, exemplified by the so-called “Italian Building” on the waterfront. Other attractions in the area are the Baptistery of St. John and the site of the ancient acropolis at Kastelli hill. Furthermore, within walking distance from Skala, on the road to Grikos, is the church of Agia Paraskevi, built in the 17th century on the foundations of an ancient temple, and on the hill of Panagias Koumanas, just across the harbor, is the seat of Panagia Koumana which dates back to the 17th century.

The village of Kampos is situated in the northeastern part of the island, 9 km from Chora and 6 km from Skala and, as its name suggests (kampos means valley), is built on a fertile region. It has 633 permanent residents and it is essentially consisted of two small villages: Epano Kampos, a Mediterranean village that expands in low hills where in the past the inhabitants of the country were building their homes, and Kato Kampos, built next to the bay bearing the same name.

Epano Kampos is a traditional village with old and new houses, and a main square, in which the school and the Church of the Annunciation – dating back to 1937 and in which the miraculous picture is kept – are located. The settlement was inhabited in the late 11th century, when craftsmen of the Monastery lived there since they were not allowed to have their houses near the Monastery.

Kato Kampos is characterized by small, white houses, gardens, fruit trees, olive trees, pines and eucalyptus – and tamarix trees along the famous beach of Kampos, which has a small pier for boats and yachts in its east end. In Kato Kampos there is also a parking lot close to the beach, restaurants, beach bars, hotels and rooms to let.

Kampos is a crucial part of the island, since from the main square one road leads both to the coastal village and its sea, and to other beaches of the northeast of Patmos, and another road leads to less tourist but equally unique destinations to the north and northwest of the island.

Originating from a picturesque fishing village in the southeastern part of the island, Grikos (Old Cottage, the first farmhouse built in the region) has become a modern seaside village with rich tourist infrastructure. Built in the bay bearing the same namem in a small green valley, Grikos is the fourth most populous settlement of Patmos with 77 residents and it is situated 4.5 km from the port of Skala, to which it is connected with regular bus service from the paved coastal road.

The bay of Grikos, with its magnificent view towards the rock “Kalikaltsou” and the beach of Petra, is classified by the international organization «Most Beautiful Bays in the world» as one of the most beautiful bays in the world and part of the beach is organized offering restaurants with local cuisine and wonderful appetizers, rooms to let and up to five-star hotels. It also has a small marina for yachts and since the bay is protected from winds from Tragonisi, it offers the possibility of offshore anchoring.

Arki (ancient Arkitis) , an island northeast of Patmos, which belongs to the municipality of Patmos, is an ideal destination for every visitor who seeks absolute tranquility surrounded by the natural beauty of the landscape. The island has ferry boat connections to Patmos, Leros and Lipsi, and during the summer day-trips are organized from the port of Patmos to the port of Arki.

Guests of this small paradise can enjoy both the abundant fresh fish of the island and the deep blue waters. The peaceful harbor is ideal for sailing boats.

The island has an area of 6.69 sq. km and is administered by the municipality of Patmos. The modern – settlement (Porto – Augusta) has been built in the cove and on its hill there are ruins of a tower and a fortress of the 4th century BC with interesting decor and religious activity in ancient times.

Marathi (or Marathos) is an island of Dodecanese and belongs to the island chain of Arki. The island, even though it is small, with an area of ​​only 355 acres and a total coastline of about 4 kilometers, is inhabited and has a small settlement. During the summer season, two taverns and some rooms to let are open in Marathi .The island attracts many visitors from all around the world, who either approach the island by boat from Patmos or by their private watercrafts.

The island offers a very beautiful beach, where each visitor apart from the crystal clear waters, can enjoy fresh seafood culinary delights and endless tranquility, far away from noise and city lights.

Any visitor can get to know Marathi during the summer months with day trips by boat that start from Skala, the port of Patmos, each morning.