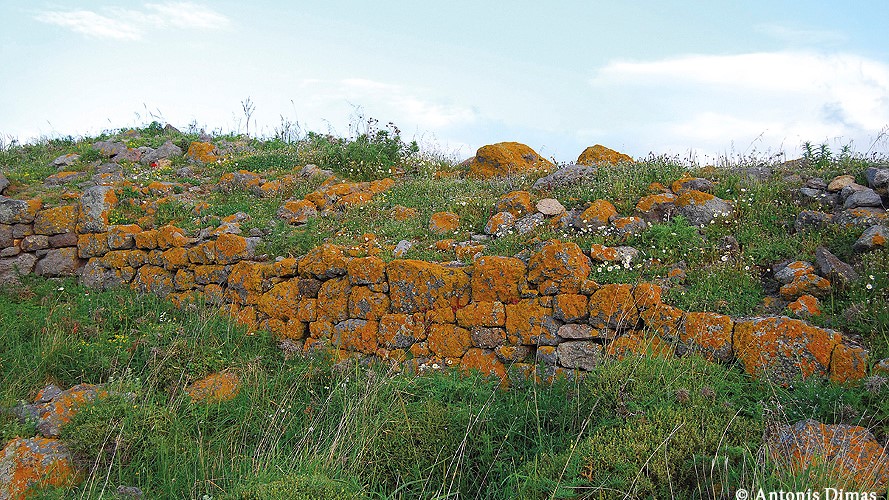 The first testimonies and reports of Patmos are dated back to the era of the great historian Thucydides on the 5th century, while according to the mythology, when Orestes was persecuted by the Furies after the murder of his mother, he reached Patmos and built one acropolis in honor of the goddess Artemis at the point where today stands the Monastery of St. John the Theologian.

Several findings of the island, however, are signs of human activity dating back up to the prehistoric period. Ceramics and stone tools from the Bronze Age, relics from the Geometric and Archaic period and the imposing wall of Kastelli village – indication of continuous habitation in the Classical, Hellenistic and Roman periods – consist “key factors” that make up a remote reality of this island. The first Greek locals are considered to be Ionians and later Dorians. The 2nd century BC, Romans converted the deserted from piratical pillage island of Patmos into a place of exile.

95 AD, Saint John the Theologian reaches Patmos as exiled from Miletus, and remained on the island for two years, writing in the Cave of the Apocalypse the namesake holy book, preaching Christianity and baptizing Christians, changing and determining forever the history of this place.

During the Byzantine period (especially during the 7th-8th century) Arab raids became the cause of devastation of the island. Many monuments were destroyed, and the inhabitants were kidnapped and sold as slaves. Patmos will obtain again new inhabitants in the 11th century, namely in 1088 AD where the Blessed Christodoulos Latrinos founded the Holy Monastery of St. John the Theologian, after the Byzantine emperor Alexios Komninos granted him the whole island. The craftsmen who came to build the monastery firstly settled in Campos, on the northern side of the island and then moved around the walls of the monastery to protect themselves from pirate raids, creating the first residential nucleus of the Country.

The invasion of the Venetians in Patmos takes place in 1659 and the monastery is plundered. In the end though of the Venetian war, the island fell into the hands of the Turks, but that fact didn’t prevent the residents from acquiring more and more ships and the monastery more glory. In the late 18th century Patmos is entering a new period of prosperity that led to its establishment as a naval and commercial center, and in 1713 Makarios Kalogeros founds the famous Patmias School, spiritual hotbed for distinguished men of letters and hatchery of national leaders. Since the establishment of Patmias School, the island began to be aware of particular spiritual, economic and maritime development, and its urban character started to rise.

In 1770, Orlov Revolt took place and the Russians made their appearance in the spotlight as liberators, while with the Treaty of Kuchuk – Kainartzi the Aegean islands returned again in the hands of the Ottomans. The national consciousness, however, which had grown strongly in previous years on the island, due to the civil and spiritual growth, led the residents of Patmos to be the second after the residents of Spetses that raised the flag of the Greek revolution. Compatriots of them were Emmanuel Xanthos, founder of the Society of Friends, and Dimitrios Themelis, who took a leading role in the Revolution in the Aegean. The Great Powers, although, with the Treaty of Constantinople (1832) ceded the Dodecanese again to the Ottomans, who handed them over to the Italians in May 1912. After the end of WWII in 1947 ,Italy ceded the Dodecanese islands in Greece with full sovereignty. Dodecanese islands formally joined the boundaries of the Greek state on January 9, 1948.